Private tours, the best way to visit the Alhambra of Granada | 25 MAY

What is the Alhambra of Granada?

The Alhambra is a set of ancient palaces, gardens, and fortresses of Andalusian origin. Some of the most impressive examples of Muslim art in the Iberian Peninsula are preserved in its halls.

It is the second most visited monument in Spain, only surpassed by the Sagrada Familia. In 2016, it welcomed an impressive 2.6 million visitors. Due to the high number of visitors, it is advisable to visit with a guide.

In addition to the citadel, the medina and other buildings, it also houses an Andalusian art museum, the city's main art gallery, as well as an old convent converted into a national Parador.

How to get to the Alhambra of Granada?

The Alhambra is located on Sabika Hill, a mound that crowns the city of Granada from its center. You can get there in several ways:

When can I visit the Alhambra of Granada?

The Alhambra is divided into three different zones, each with its own entry times:

There is also a schedule of exclusive visits that take place in the periods between day and night visits.

Gardens and Palace of the Generalife

These can only be visited at night:

You can check these hours and closing days in detail on the official website.

The best way to visit the Alhambra

The extension of the Alhambra is considerable. The best way to get to know it in-depth without missing any of its incredible secrets is to do it with a professional guide. This way, you will delve into this impressive place's culture, beauty, and history.

Visit the Alhambra nowwith the confidence that comes from being accompanied by our best guides. 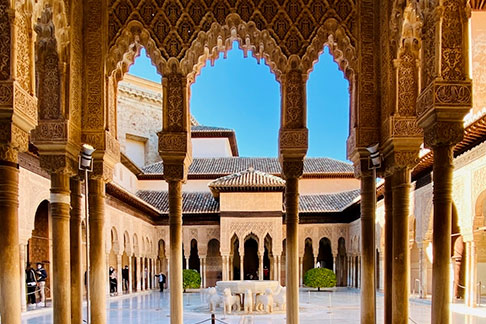