Everything you need to know to visit Medina Azahara | 11 MAY

Medina Azahara, or Madīnat al-Zahrā by its original name (literally, "The shining city"), is an ancient palatial city on the outskirts of Córdoba. The Caliph of Córdoba Abd-al Rahman III ordered its construction in the year 936, less than a century before the end of the caliphate.

What’s the history of Medina Azahara?

Caliph Abd al-Rahman III conceived the city as a symbol of power, with the intention of showing the superiority of his caliphate to his political and religious opponents.

Unfortunately, it was destroyed and looted not much later by the Berbers, between the years 1010 and 1013, in the context of a civil war that put an end to the Caliphate of Córdoba.

The ruins were buried for almost a millennium until the excavations began in 1911. The city extends over 112 hectares, of which only a third has yet been excavated.

How to get to Medina Azahara?

The city is 8 km from Córdoba, so you will have to take a vehicle. You can get there in several ways:

When can I visit Medina Azahara?

You can visit Medina Azahara from Tuesday to Sunday. The complex has 4 different schedules throughout the year:

From January 1st to March 31st

From April 1st to June 15th

From June 16th to September 15th

From September 16th to December 31st

The night visits are only to the excavation site (not the museum) and are only available in summer:

From July 1st to September 15th:

Medina Azahara is a complex with a fascinating history that belongs to one of the most decisive periods in Spanish history. A hallmark of Córdoba and Andalusia that evidences its Muslim past and enriches the incredible heritage of this beautiful place.

Come and visit Medina Azahara and discover all the secrets and history of this magnificent city. In order not to miss anything, we recommend that you have the help of a professional guide who will ensure that you enjoy your visit to the fullest. 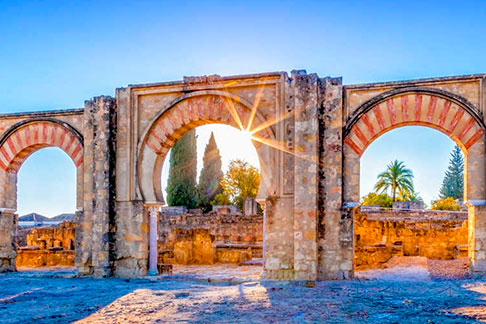