In this article, you will find out everything you need to get the most out of your visit to the Mosque of Cordoba, the third-largest mosque in the world and a true treasure from the al-Andalus era. Declared a World Heritage Site in 1984, the Mosque of Cordoba is one of the most visited monuments in all of Europe.

What’s the Mosque of Cordoba?

The Mosque-Cathedral of Cordoba is an ancient Muslim temple dating from the year 785, later converted into a cathedral after the Reconquest. It is, together with the Alhambra, the most important monument of all al-Andalus architecture and one of the most representative treasures of Umayyad art. It has received numerous awards, even being named “The best tourist site in Europe”.

What’s the history of the Mosque of Cordoba?

The Mosque was founded at the end of the 8th century under the order of Abderramán I, one of the members of the Umayyad dynasty who managed to escape the Abbasid revolution. After expelling the Abbasid governor of Cordoba, Abderramán I established the Independent Emirate of Cordoba in the year 756. Not much later, in the year 785, the construction of the foundational Mosque began, which lasted only two years. Over time, numerous extensions were carried out by subsequent caliphs.

Its use as a mosque ended in 1236 after the Castilian conquest of Cordoba by Fernando III of Castile. The building has undergone numerous interventions, demolitions, reforms, and restorations from then until today. This gives it a unique style, which takes elements from different eras, cultures, and artistic currents.

How to get to the Mosque of Cordoba?

The Mosque-Cathedral of Cordoba is located in the historic center of the city, and you can get there in several ways:

Given the mosque's location, you can take advantage of the occasion and make a joint visit to the Jewish quarter or the fortress with a local guide who will show you all the secrets of this beautiful city.

Where can I stay near the Mosque of Cordoba?

There are numerous hotels in the center that offer quality accommodation less than 10 minutes from the mosque, and these are some of them:

When can I visit the Mosque of Cordoba?

The Mosque of Cordoba offers visits at two times, one during the day and the other at night:

Cordoba is a charming city and the Mosque of Cordoba is one of the most important and most visited monuments in Spain and all of Europe. Visiting it is a unique experience that every traveler should have. Its immense halls, history, art, and relics make the mosque a special place worldwide.

If you want to enjoy a quiet and complete visit, do it with the best local guides with whom you will delve into the beautiful history of this magnificent city. Come and visit the Mosque of Cordoba! 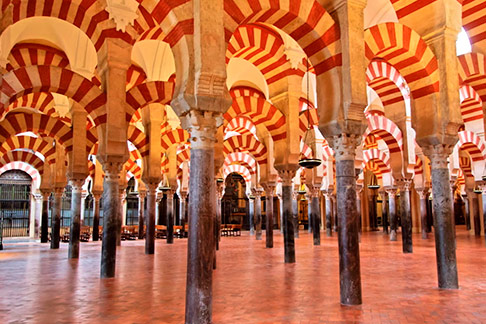