Tour to the Real Alcazar of Seville | 28 OCT

History of the Real Alcazar of Seville

As we mentioned in the introduction, the Real Alcazar of Seville was and is a witness of different historical periods of the Andalusian capital. Through its doors, different cultures have left their mark.

In 711 the Muslim invasion took place, and for five centuries they exercised power in the city. Híspalis was renamed Isbiliya, the river Betis, Guadalquivir and throughout the centuries of Muslim domination in this city, there were different political situations, as well as different dynasties of rulers.

It was at the beginning of the 10th century when the primitive Alcazar was built, which successive monarchs extended and reformed, and which was both a military enclosure and a royal palace. Of all those who inhabited it, we want you to keep the name of Al-Mutamid, who in addition to being a sultan was an excellent poet.

In 1248 the troops of King Ferdinand III took the city for Christianity and the crown of Castile. Since then the Castilian kings will live in the Alcazar, but making many reforms. The first was the Gothic style palace built by King Alfonso X the Wise.

But if there is a king of Castile whose name is linked to the Alcazar, it is Pedro I, for some "the Cruel", for others "the Justiciero". Despite being a Christian king, when he decided to build his own palace, he did so in the Arab style. Between 1364 and 1366, what is now the core of the Alcazar was built, and the king, in addition to the master builders from Seville, had craftsmen brought in from Granada and Toledo. It is, therefore, a Mudejar style building.

Later kings, especially the Catholic Monarchs, continued to reform the building, but the most important reforms took place in the 16th century.

In this century, Seville was one of the most important cities in the world, because only in this city we possessed the privilege of being able to trade with America, so that everything was filled with foreign merchants, and there was in the city much movement of gold and silver.

The last major works of the Alcazar will be done after the earthquake of Lisbon in 1755, which caused damage to the building. Since then, it has been frequently restored.

Queen Isabel II, who spent many seasons in the Alcázar, also carried out important reforms.

At present, the Kings of Spain have their official residence in the so-called Cuarto Real Alto, with some rooms being open to the public, such as the oratory of Isabel the Catholic. Historical moments in the Real Alcázar of Seville

Alfonso X wrote there his Cantigas

Alfonso X of Castile, known as "the Wise" resided in the Real Alcazar of Seville during his stay in the capital. But more than for his military exploits, Alfonso X is recognized for his scientific and literary legacy. His work includes historical, literary, scientific and legal texts of great caliber.

His literary work includes the Cantigas de Santa María, which is said to have been written within the walls of the Alcazar of Seville, in the Gothic Palace. Although there is some debate about their authorship, it is certain that they were written under his mandate.

The Cantigas de Santa Maria are a set of 420 musical compositions written in medieval Galician dedicated to the Blessed Virgin Mary. 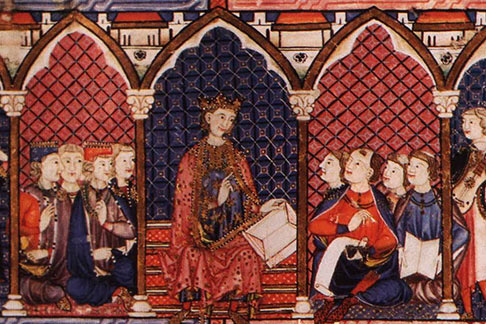 A very important event also took place: Emperor Charles decided to marry Isabella of Portugal in Seville. The Alcazar became the scene of one of the most impressive weddings in history, in March 1526. 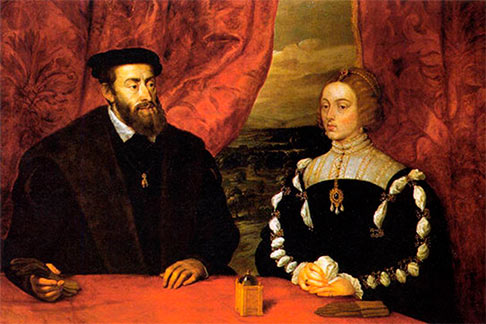 In the year 1477, during the War of the Castilian Succession, the Catholic Monarchs Isabella and Ferdinand arrived for the first time in Seville. Five times in total they would visit the city of Seville, and during this period they would improve the facilities of the Real Alcazar of Seville, building the Admiral's Room, the hall of the Catholic Monarchs, the High Palace and the oratory, among others.

The Prince's room was the place where his heir, the infant Juan de Aragón, was born, just one year after the arrival of the Kings to Seville.

The last great event held at the Alcazar was the wedding banquet of the Infanta Elena, in March 1995. As in the glory days of the past, to celebrate that occasion, this palace welcomed members of the royal houses and European nobility (although they did not stay overnight here, but at the Hotel Alfonso XIII).

Private tour of the Real Alcazar of Seville

In Pancho Tours we have guided tours of all styles and for all budgets. If you want to see all the options we offer, you can do it in our category Visit to the Alcazar.

In this case we want to tell you about our official private tour in the Alcazar of Seville.

Explore every corner of this wonderful monument, with local guides. We focus the private tour to your needs, art or architecture lovers, visit with children, botany enthusiasts, general visits. Enjoy a tailor-made tour with the people you love.

These are the services included in our private tour to the Alcazar of Seville: Official private tour of the Alcazar of Seville

Make the most of your time and don't wait in line. Private, exclusive and personalized visit with tickets included. Alcazar and Cathedral of Seville Private Tour including tickets and pick up at your hotel. An exclusive and personalised visit that allows you to see the most emblematic monuments without wasting time queuing. Seville Free Tour and Guided Tour inside the Royal Alcazar Visiting the Mosque of Cordoba from Seville

If you are staying a week in the Andalusian capital and you want to take advantage and discover nearby cities. Visiting the Mosque of Cordoba from Seville is an ideal option. Cordoba is 1 hour and 45 minutes away by car, so it is close enough to enjoy a unique day. Free walking tours are becoming increasingly popular. They are one of the best ways to get to know the city you are visiting. In this article, we tell you all about Free Walking tour Seville. With Pancho Tours you can discover the Andalusian capital in the most beautiful way. On foot, enjoying every corner and its atmosphere.